Jack Berriault wrote the words below before he died a few years ago, and we're sharing them as a reminder of a man who spent his life standing for the possibility of a world that works for everyone, with no one left out. 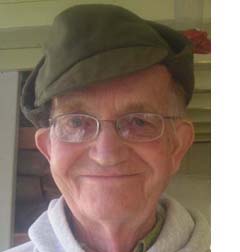 "To understand why transformation, not change, is the path forward, we must first be grounded in present reality. The relentless colonizing of the West Bank by Israel and the often violent subjection of the Palestinian people is systemic and not affected by demonstrations and appeals for redress, except in minor and temporary cases.

Jack defined transformation as a shift in state, as in from liquid to gas or solid. To transform a painful past, he would assert: get to the source of the matter in a conversation, witnessing and listening, hearing, releasing the past, accepting, forgiving and being forgiven, until there's nothing left. From nothing, anything is possible.

Getting to a place of nothingness could require generous listening.

He imagined this process for the people in Israel and Palestine as a wider conversation, in which workshops could be held using the book "A Common Historical Narrative for Israel and Palestine" as a starting point of historically-agreed-upon facts for a broader, guided conversation, in which people in small groups could share and be heard about their own experience and past until they had nothing left unsaid, and were at a place of nothingness, free to choose a future.

He intended this process to support people to step into new leadership for this created future.

He envisioned workshops led by leaders from Israel and Palestine, and he was looking and listening for these leaders at the time of his passing. He wrote the workshops and was working with a team of powerful coaches. He imagined it as a finite process of reconciliation, and one that would likely take years.

The board and advisory council of the Israel Palestine Project are delighted to continue the process that Jack began over a decade ago, to publish "A Common Historical Narrative for Israel and Palestine" with the wonderful team at Hebrew University of Jerusalem.

The work has been approved by noted Israeli and Palestinian historians Moshe Ma'oz (Hebrew University) and Dr. Philip Mattar (Palestinian Research Center in Washington DC), and translated to Arabic, Hebrew and English. Currently, it's in the final stages of editing before going to design, intended for publication for Autumn 2019. The team is fundraising for final design and printing expenses, and welcomes contributions to complete the book. You can also pre-order the book.

Thank you for your attention and for engaging with The Israel Palestine Project.

homepage
Please check your e-mail for a link to activate your account.